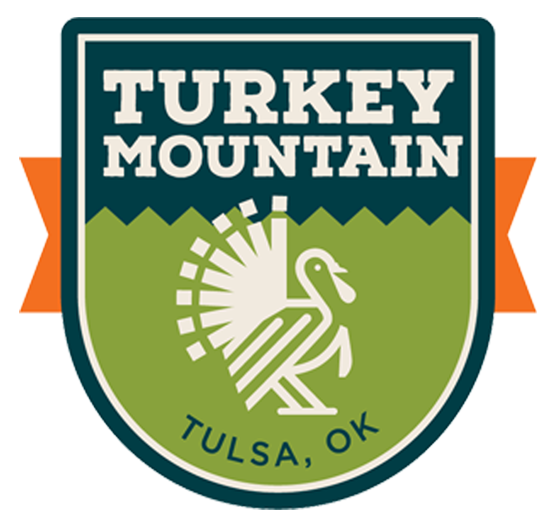 One of northeastern Oklahoma’s unique recreational treasures, the Turkey Mountain Urban Wilderness encompasses over 300 acres of rugged park land located only a few miles from Tulsa’s vibrant downtown. The landscape creates a sense of being far from city life, with visitors surrounded by a thick canopy of trees including native Post and Blackjack Oak, Hickory, Redbud and other species. This area of River Parks stretches north-south from I-44 to 71st Street, and from Elwood Avenue, east to the Arkansas River. The highest point on Turkey Mountain lies within the park’s boundaries, rising 300 feet above the river.

Turkey Mountain offers miles of winding dirt trails and two large ponds, features that date back long before the land was acquired for public usage. The main parking lot, restroom and trailhead are located at 67th and South Elwood. Nearby are three covered pavilions that are available on a first-come, first-served basis, plus children’s climbing boulders. Two of the park’s bronze wildlife sculptures, “Rio Grande Turkeys” and “Rocky Mountain Bighorn” enhance the entrance.

If you plan a trip to Turkey Mountain, wear seasonally-appropriate clothing; sturdy footwear is recommended even for short hikes. The only drinking water is at the trailhead so park visitors should always carry water, including water for pets, which must be on a leash at all times. The trails are rough and often rocky, with exposed tree roots, low limbs and heavy brush, including poison ivy. Grades are steep in many areas and slippery after rains. Turkey Mountain is intentionally maintained as an urban wilderness to offer a challenging recreational experience in contrast to the miles of mostly flat trails and manicured park areas elsewhere along the riverfront. Snakes are occasionally seen during hikes and should be left alone. If you attempt to “shoo” one away, it may strike.

Visitors to Turkey Mountain should carry a cell phone and know how to use the phone’s GPS tracking.  Hiking or riding alone in isolated areas is discouraged. The main parking lot includes space for horse trailers. Equestrians should consider the temperament of their horses before venturing onto the shared-use trails. A map of the marked trails is located near the trailhead, along with signage describing the varying degrees of difficulty for some of the trails. Click here for a Google map and find more information about Turkey Mountain at facebook.com/turkeymountain. The curfew throughout River Parks, including Turkey Mountain, is 11 p.m. to 5 a.m. and only the asphalt trail through Turkey Mountain has lighting.
‍
DOWNLOAD THE TURKEY MOUNTAIN MAP (OLDER VERSION) 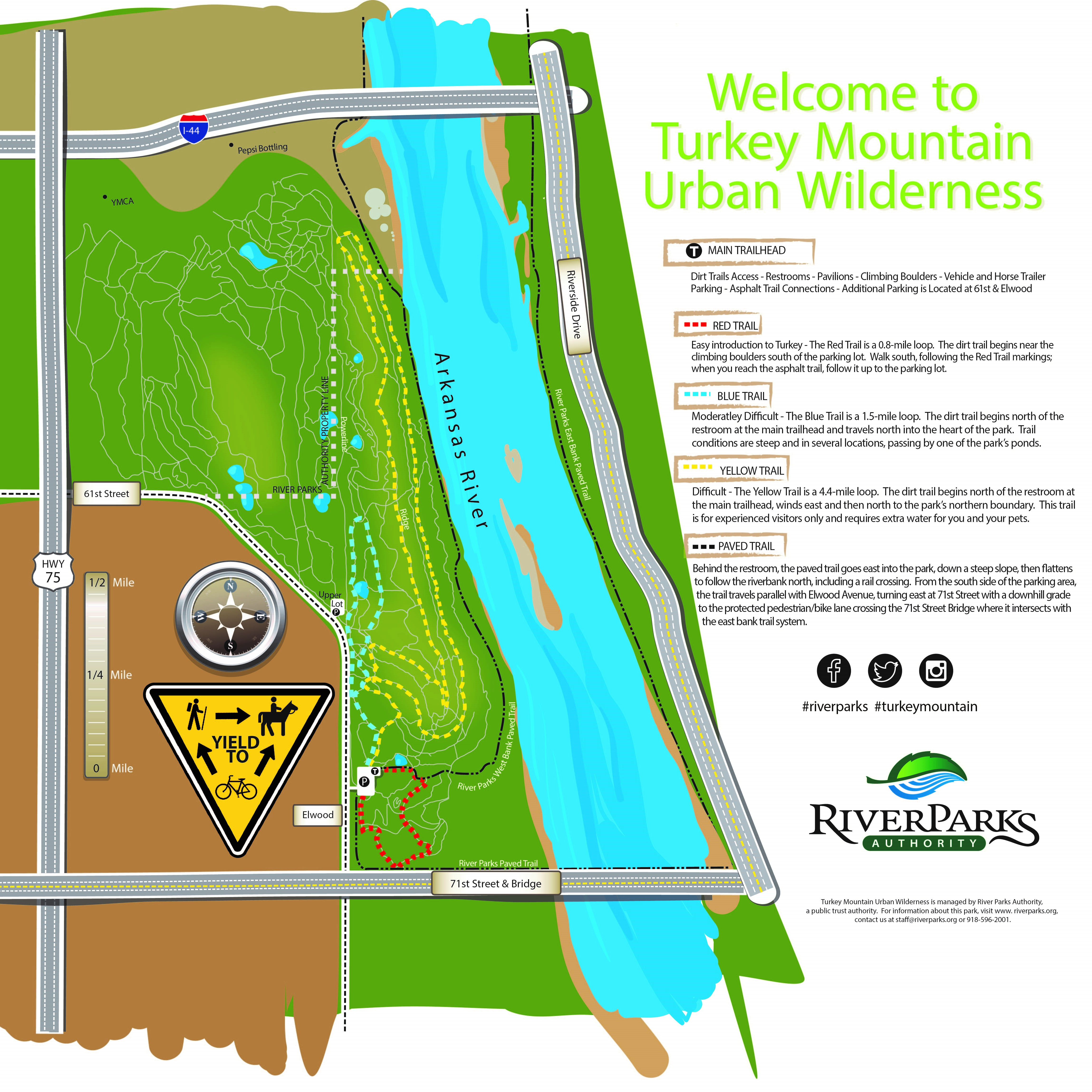 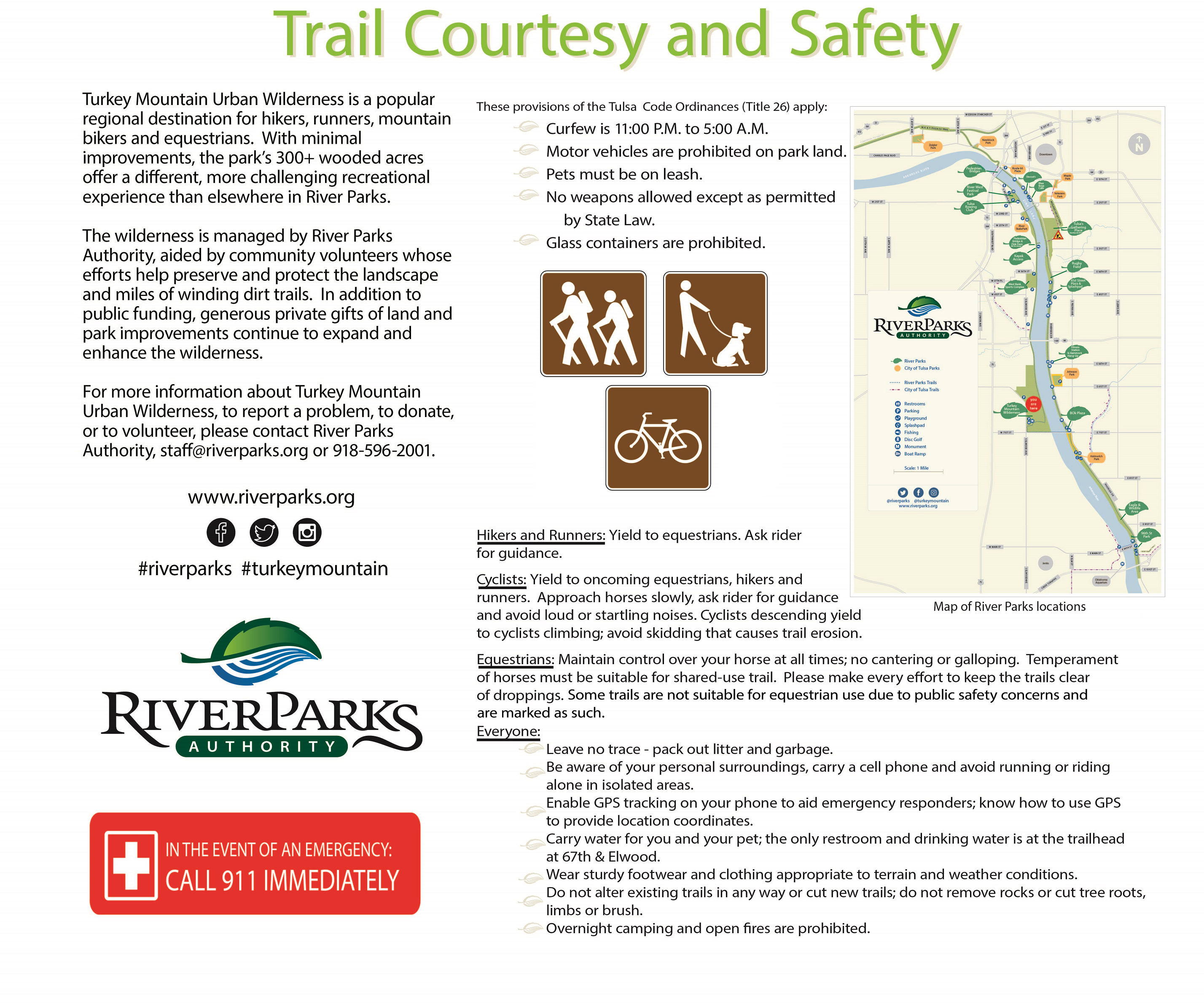 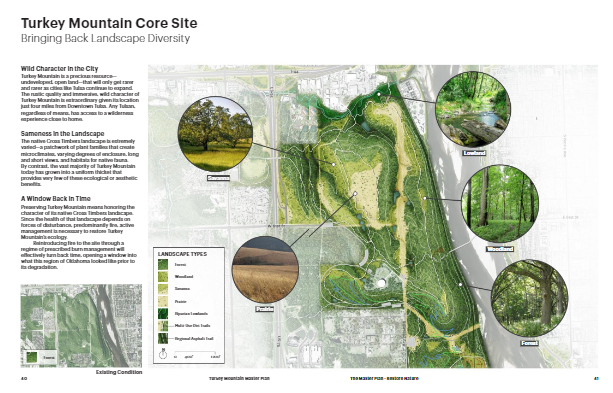 Turkey Mountain Master Plan: Preserving the Past and Shaping the Future.
‍Rising above the west bank of the Arkansas River, River Parks’ Turkey Mountain Urban Wilderness is an untamed oasis in the heart of the city. Encompassing over 600 rugged acres, the park’s thick canopy of native trees watch over winding trails, serene ponds and ancient boulders. Secured to remain a public park in perpetuity, the Wilderness is a one-of-a-kind regional destination that continues to grow in popularity.

A final version has been completed for a community-driven Turkey Mountain Master Plan that will address the park’s management, preservation, and programming based on over 4000 public comments and 3 public meetings which provided the community input that formed the basis for the Master Plan. River Parks Authority has overseen the planning process, with Michael Van Valkenburgh Associates providing professional guidance to establish a vision, assuring the Wilderness will offer the best in outdoor recreation for current and future generations.


LEARN MORE ABOUT THE MASTER PLAN BY WATCHING OR READING THE FOLLOWING NEWS LINKS.

Download the November 14, 2019 Public Presentation Meeting slides outlining the key aspects of the presentation HERE. Download a printable document HERE. Please note that this presentation is based on several public meetings and over 4,000 public comments. It truly is a plan created by the citizens of Tulsa for their vision of what Turkey could look like in the future. As of right now, there is no funding to pursue the implementation of any aspect of this plan.
‍
YOU HELPED US SHAPE THE TURKEY MOUNTAIN EXPERIENCE

No group is better equipped to share insights, practical experiences and passion for the Wilderness than the park users who have championed Turkey Mountain over decades. Community input was essential to crafting a plan for this well-loved public space. Over 4000 public comments and 3 public meetings provided the community input that formed the basis for the Master Plan. Through the eyes of regular park users, a better understanding was gained of:
- How the Wilderness is used now and how areas of expansion might be used
- How the landscape and park features contribute to the Wilderness experience
- How visitors are presently navigating the area and interacting with nature
- Identifying the unique and valued aspects of the Wilderness experience will inform an array of best practices for specific elements of the Master Plan.

A Brief History of Turkey Mountain Urban Wilderness Area
‍Land acquisition for a public park on Turkey Mountain began in 1978 with 147 acres purchased with funds from Tulsa County, a federal grant, and a contribution from the landowner, J.L. Reynolds.  In 1996, Stephen J. Jatras donated an additional 80 acres of land at the corner of 71st and Elwood.  In subsequent years, additional tracts were acquired with City of Tulsa 3rd Penny Sales Tax funds.  Those parcels and others owned by the City of Tulsa were leased to the Authority and included in the Wilderness boundaries.  The extension of the VisionTulsa program in 2016 includes $7.6MM for Turkey Mountain:  $5.6MM for the acquisition of additional land for the park and $2MM for amenities.  A loan to River Parks Authority from the George Kaiser Family Foundation and QuikTrip Corporation allowed the Vision land purchases to begin soon after the vote so that acquisition opportunities would not be lost.

The origin of the name Turkey Mountain remains an unsolved mystery, as does local lore of Viking visits which are very likely not true. ‍But the land figured into Tulsa’s early history as the site of oil well drilling, the remnants of which can still be seen around Turkey Mountain today. The Mountain is traversed by a section of the 1904 Midland Valley Railroad line now owned by the Union Pacific Railroad and operated by the Tulsa-Sapulpa Union Railway which runs twice daily, mornings and evenings, Monday through Friday. It is believed that the name Turkey Mountain stems from the likelihood that the area was once a popular spot for hunting wild turkeys.

You might have read about “petroglyphs” at Turkey Mountain. We have had multiple professional archaeologists out to examine them in great detail and they were not placed there by the Vikings as is often rumored. The archaeologists tell us that the sandstone is very soft and highly erodible and any carvings in them would quickly fade with exposure to wind, rain, and sun. At most, these carvings were done in the 1920s by oil field workers who were all over the mountain exploring for oil.

In late 2017, Tulsa Mayor G. T. Bynum announced that the City of Tulsa had agreed to transfer title to River Parks Authority for its leased Turkey Mountain properties, assuring that it will remain public park property in perpetuity. In support of this action by the City, the George Kaiser Family Foundation, which has been land banking properties on Turkey Mountain for over a decade, announced that it will deed its properties to the River Parks Authority for inclusion in the Turkey Mountain Urban Wilderness. It is expected that a master plan encompassing the entire Wilderness will be undertaken in the next year or two.

Improvements at the main entrance to the Wilderness Area were completed in 2009 with a grant from the George Kaiser Family Foundation. That gift financed expanded parking, a restroom building, climbing boulders and improved trailhead access. The entrance is further enhanced by two bronze wildlife sculptures donated to the citizens of Tulsa by NatureWorks, Inc., “Rio Grande Turkeys” and “Rocky Mountain Bighorn." Three pavilions located near the entrance were financed by proceeds from “Wild Turkey,” a biennial fund-raising event that benefits River Parks’ projects and programs.  Friends of River Parks donors also contributed to the pavilions.  In response to demand, a second parking lot to serve park visitors was opened and later expanded on 61st Street, west of Elwood Avenue.